The Saskatchewan Burrowing Owl Interpretive Centre (SBOIC) was created to help promote the conservation of the endangered Burrowing Owl and their prairie habitat through education, stewardship and eco-tourism. The Centre opened its gates to the public for the first time in the spring of 1997.

The building site, located on the Moose Jaw Exhibition Grounds, was chosen because several pairs of burrowing owls typically nested in the infield of the racetrack!

In the beginning, SBOIC consisted of a small interpretive centre that showcased pictures and displays, and was staffed by a single person. Visitors used spotting scopes from an observation blind to view the wild owls nesting in the infield of the racetrack. Over the years the Centre has expanded to include a gift store, a larger display area, and a traveling educational program “Owls on Tour”. The Centre is also the permanent home to a small captive population of owls.

SBOIC is a non-profit organization which does not receive provincial or federal funding. The Centre depends entirely upon the generosity of individual donors as well as funding through various educational and/or environmental grants. 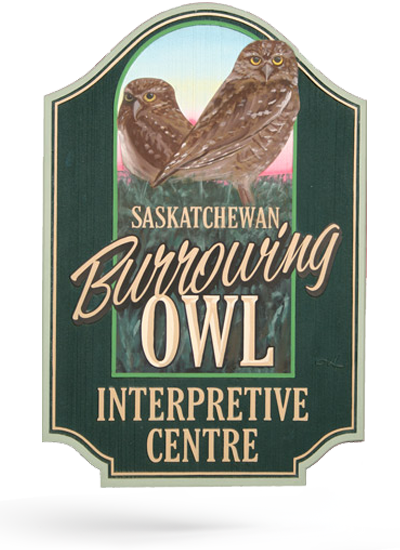 Plan A Visit
Adopt An Owl
Owls On Tour

We’d like to thank our sponsors who provide generous support and keep our centre running.  Thank you to all our partners, individual donors and volunteers who have given so generously.